What's a hero? I'm not sure how to define one, but I certainly know one when I see one. And earlier this week, I got to see one.

Dr. Harrison Schmitt is one of only 12 men to have walked on the moon. He was an astronaut on Apollo 17, the last NASA mission to land on the moon. He was also a United States Senator, chair of the NASA Advisory Council, and professor of engineering physics. And, at least according to his remarks, he still actively works with NASA.

He also has a very well developed sense of humor, as he was happy to share this clip of Norm McDonald asking David Letterman how it's possible that any of the Kardashians are more famous than someone who walked on the moon.

I was captivated listening to his remarks about his work on the Apollo lunar project. 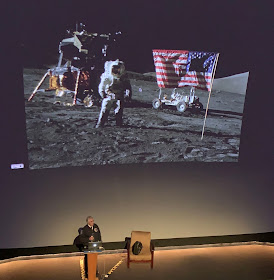 Here's what I read this week.