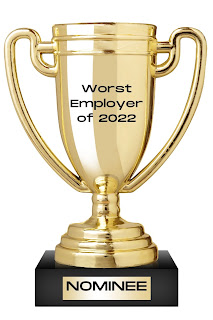 The most disturbing case I ever handled involved a company that hired a registered sex offender as a supervisor, who then raped a female subordinate.

Today’s “Worst Employer” nominee is very much in that tragic and devastating vein.
Vice provides the details, which it confirmed with Claire, he co-workers, court records, and even Starbucks itself.

Claire, age 18, worked as a barista at a Starbucks. She reported to her store manager that her shift supervisor had sexually assaulted her at his house the prior day. She also reported the assault to the local police, which arrested the supervisor.

Starbucks initially suspended him for two weeks to conduct an internal investigation, but ultimately returned him to work because he proclaimed his innocence.

The terms of the supervisor’s bail, though, did not permit him to return to Claire’s place of work. Thus, Starbuck simply transferred him to another shop a mere 15 miles away. At no point did Starbucks ever inform anyone at the new location that their new supervisor had been accused of and arrested for sexually assaulting a subordinate … even after employees reported to management that he was harassing them.

Indeed, he remained at the new shop as a shift supervisor for nearly five months, and even kept his job after pleading guilty to assaulting Claire.

Finally, five weeks after his guilty plea, and only after a court order that he register as a sex offender, did Starbucks terminate the supervisor.

If you knowingly employ a supervisor accused of, and who pleaded guilty to, sexually assaulting his subordinate, and then transfer him to another store for months without telling your employees, you might be the worst employer of 2022.
Jon Hyman
‹
›
Home
View web version