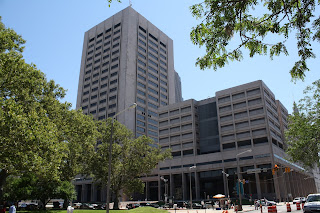 Ask any litigant who has had the (dis)pleasure of being a party to civil litigation in the Cuyahoga County Court of Common Pleas for their opinion on the experience, and I can almost guarantee they will tell you two things — their case moved too slowly and the courthouse is gross. A proposal currently being considered will fix the latter while making the former exponentially worse.
The Cuyahoga County Court of Common Pleas has 34 presiding judges. That's currently has. According to Cleveland.com, a proposal is being considered to slash that number. Why? Because fewer judges mean fewer necessary courtrooms, which means that the new courthouse that Cuyahoga County desperately needs will be less expensive to construct.
This idea is terrible. Civil cases move slowly through our court. Yet, it's not the court's fault, it's not the judges' fault, and it's not their staff's fault. It's a systemic fault caused by a system that has the same group of 34 judges simultaneously presiding over civil and criminal dockets. Criminal cases always take precedence. That's how our system must operate because the Sixth Amendment to the United States Constitution guarantees criminal defendants "the right to a speedy … trial." If criminal cases did not take precedence, too many criminal defendants would go free prior to trial because they could not obtain a "speedy trial."
Reducing the number of judges for the sake of construction costs will not remedy this problem. In fact, it will only make it exponentially worse. Slashing the number of judges would be an unmitigated disaster for civil litigants, who already wait years to try their cases.
I implore the Cuyahoga County Commissions to reject any proposal that calls for a reduction in the number of Common Pleas judges as a means to pay for a new courthouse. Don't get me wrong; we desperately need a new courthouse. But the county should not pay for it at the expense of the civil justice the court is supposed to dispense.
Here are the best things I read online this past week that I think you should be reading, too.
Why did Kate Bischoff rebrand her company from tHRive Law & Consulting to K8bisch LLC? — via Kate Bischoff on LinkedIn
Waning Immune Humoral Response to BNT162b2 Covid-19 Vaccine over 6 Months — via The New England Journal of Medicine
Pandemic Parenting: Here's how one parent is juggling quarantines and school closures — via CNN
Employers Weigh How to Manage Working Parents Absent Because of COVID-19 — via EntertainHR
Vax Mandate, Not Lax Mandate: Security Considerations for Vaccine Mandate Compliance
— via HR Hero Line
San Jose Sharks forward Evander Kane being investigated by NHL after allegedly using a fake COVID-19 vaccine card, source says — via ESPN
Will employees need a booster shot to count as vaccinated? — via HR Dive
Your business may not be in the clear yet from those early-pandemic discrimination claims — via Eric Meyer's The Employer Handbook Blog
Metallica COVID insurance lawsuit could end up being a big deal for everyone — via Alan Cross' A Journal of Musical Things
It’s a New Era for Mental Health at Work — via Harvard Business Review
Jon Hyman
‹
›
Home
View web version