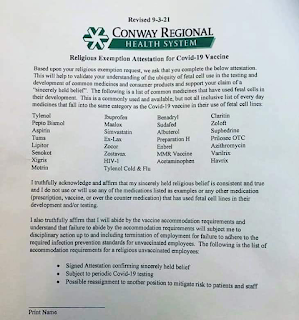 As the debate over religious exemptions to workplace Covid vaccine mandates, one hospital has taken a unique approach to verify the sincerity of its employees' anti-vax religious beliefs.
The issue stems from the misconception that Pfizer-BioNTech's and Moderna's mRNA vaccines contain aborted fetal cells, and certain people's religious objections to abortion.
In reality, the vaccines do not contain aborted fetal cells, although Pfizer and Moderna did use fetal cell lines — cells grown in a laboratory that are based on aborted fetal cells collected generations ago — in testing during research and development of the mRNA vaccines.
Other medications that also use fetal cell lines in their research and development include Tylenol, Pepto Bismol, aspirin, Tums, Lipitor, Senokot, Motrin, ibuprofen, Maalox, Ex-Lax, Benadryl, Sudafed, albuterol, Preparation H, MMR vaccine, Claritin, Zoloft, Prilosec OTC, and azithromycin.
Thus, Conway Regional Health System is asking any employee who raises this religious objection to getting the Covid-19 vaccine to certify, in writing, that they "truthfully acknowledge and affirm that my sincerely held religious belief is consistent and true" and that they do not and will not use the medications and any others like them.
According to Ars Technica, Matt Troup, president and CEO of Conway Regional Health System, the reason for this document is two-fold. First, the hospital wants to ensure that employees' stated beliefs are sincere, and second, it wants to "educate staff who might have requested an exemption without understanding the full scope of how fetal cells are used in testing and development in common medicines." Employees who refuse to sign the form will still receive a provisional exemption, although a future refusal to sign if asked again could result in discipline or even termination of employment.
The issue is how to discern a legitimate religious request for which the law requires an employer to offer an accommodation from requests for purely philosophical or political objections (which could still be legitimate but for which the law imposes no duty upon an employer to accommodate).
If you are planning on following Conway Regional Health System's lead, I suggest you vet your plans through your company's own employment counsel, as religious accommodation issues are fraught with legal risk, particularly one as charged as this one continues to be.
Jon Hyman
‹
›
Home
View web version