What Would Ted Do? #WWTD 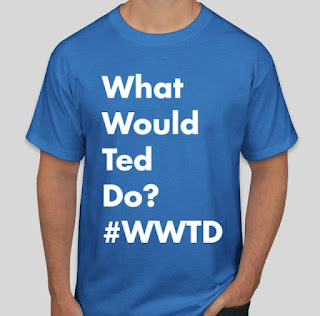 First, there was my Golden Rule of Employee Relations: Treat your employees as you would want to be treated (or as you would want your wife, kids, parents, etc., to be treated).
Next there was my Platinum Rule of Employee Relations: Treat your employees as they would want to be treated.
Finally came my Eight Word Meaning of Life and its Corollary: Be kind to others and do good things … and do all you do with [mucho mucho] joy.
Today, I'm going to sum all of this up in one tidy four-word question.
What would Ted do?
The "Ted" in question is Ted Lasso, the titular coach in the hit AppleTV+ show.
For the uninitiated (For goodness sake, what are you waiting for? Stop reading, lay down the $4.99 per month for Apple TV+, and get on board already!) Ted Lasso is the story of an American DII college football coach hired to manage an English Premier League football club, despite not knowing the first thing about soccer. As it turns out (mildest of spoilers), unbeknownst to Ted, he's been hired to tank the team for reasons that are revealed in the very first episode.
Without rival Ted Lasso is my favorite television show ever. Laugh out loud (and I mean out loud) funny, beautifully sweet without being remotely saccharine, often tear-inducing (although I'm the first to admit that I'm an easy crier), relentlessly positive, and unwaveringly optimistic. After living through the most stressful election of my lifetime (including an almost coup) and the first 18 months of a deadly pandemic, Ted Lasso is everything we need right now to help right the askew ships of our collective psyche. Even in the best of times, however, Ted Lasso would remain a pure joy to watch. It's just that infectious in all the good ways.
The following seven Ted-isms sum up the philosophy of Ted Lasso (the character) and Ted Lasso (the show).

You know what the happiest animal on Earth is? It's a goldfish. You know why? Got a 10-second memory. Be a goldfish, Sam.

For me, success is not about the wins and losses. It's about helping these young fellas be the best versions of themselves on and off the field.

Be curious, not judgmental.

I want you to know, I value each of your opinions, even when you're wrong.

Please do me this favor, will you? Lift your heads up and look around this locker room. Look at everybody else in here. And I want you to be grateful you're going through this sad moment with all these other folks because, I promise you, there is something worse out there than being sad. And that is being alone and being sad. Ain't no one in this room alone.

Hey, doing the right thing is never the wrong thing.

How does the Tao of Ted translate to your workplace? Or better yet, what does your workplace look like when you ask "What would Ted do?"
If you're not watching Ted Lasso, please correct your error. It's a rare form of entertainment that can make you a better person. And thank you, Jason Sudeikis, Bill Lawrence, Brendan Hunt, Joe Kelly, Brett Goldstein, Juno Temple, Hannah Waddingham, Jeremy Swift, Phil Dunster, Nick Mohammed, Toheeb Jimoh, Cristo Fernández, James Lance, Sarah Niles, and everyone else who helps brings this treasure to life and into our homes.
Let's all try to be more like Ted by asking "What would Ted do" when we are faced with a difficult situation or critical decision. The world would be a much better place for it.
For more on Ted Lasso and the workplace, I recommend checking out Dan Schwartz's post here.
Jon Hyman
‹
›
Home
View web version