Let's meet employees where they are on their pronouns 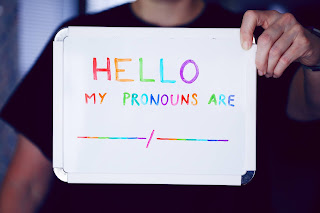 In Meriwether v. Hartop, the 6th Circuit recently decided that a state university cannot force a professor to use students' preferred gender pronouns, and permitted the prof to proceed with his lawsuit challenging the school's discipline for his misgendering.

The plaintiff, Nicholas Meriwether, a philosophy professor at Shawnee State University and a devout Christian, challenged the school's decision to discipline him for violating a policy that instructors were to use a student's preferred pronouns after a student accused him of refusing to properly identify her as a woman or with she/her pronouns. Meriwether claimed the policy violated his First Amendment free-speech and religious freedoms. The 6th Circuit agreed enough to re-institute his claim.

Traditionally, American universities have been beacons of intellectual diversity and academic freedom. They have prided themselves on being forums where controversial ideas are discussed and debated. And they have tried not to stifle debate by picking sides. But Shawnee State chose a different route: It punished a professor for his speech on a hotly contested issue. And it did so despite the constitutional protections afforded by the First Amendment. The district court dismissed the professor's free-speech and free-exercise claims. We see things differently and reverse.

Unless you are a public employer governed by the Constitution and the First Amendment protections it guarantees, Meriwether has limited applicability to your workplace, your rules, and your employees. Moreover, after Bostock v. Clayton County, it's likely a Title VII violation to intentionally misgender an employee.

Nevertheless, legal or illegal, Meriwether can teach us some important lessons about meeting employees where they are. Here are some things to think about regarding gender, pronouns, and your employees.

1/ Educate yourself about the use of pronouns. When I went to school I learned that "he" refers to a singular male, "she" to a singular female," and "they" to plural wo/men. That is no longer the case. A man can identify as "she" and a female as "he," and they/them pronouns are used for individuals who identify as non-binary, gender-fluid, or whoever chooses to use them.

2/ Do not assume what pronouns your employees use. Just because someone presents a particular way doesn't mean they their pronouns fit match that presentation.

3/ If you're unsure, ask. Your employees who use alternate pronouns will be more than happy to help you.

4/ Avoid gendered language. For example, use "y'all" instead of "you guys" and "everyone" or "people" instead of "ladies and gentlemen" or "men and women."

More to the point, if you insist that you must refer to someone born with a Y chromosome as "he" and two X chromosomes as "she," why do you care? If an employee identifies as female (regardless of whether she was born a male), why do you care what pronoun she uses? This issue is nothing more than a solution in search of a problem. You are doing way more harm to the mental well-being of your employees if you misgender them than you are doing to other employees by having them rethink how they use pronouns. Any other answer to this issue is bigotry, period. And, in 2021, we should be well beyond bigotry of any kind.

* Photo by Sharon McCutcheon on Unsplash