Civil rights is not a pizza 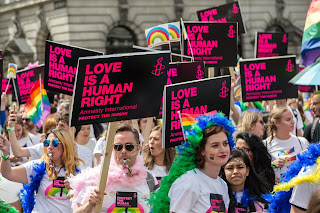 Among the litany of executive orders President Biden issued in his first two days in office was one on Preventing and Combating Discrimination on the Basis of Gender Identity or Sexual Orientation. It's a beautiful statement adopting as the policy of the federal government the Supreme Court's decision in Bostock that Title VII's definition of sex explicitly includes LGBTQ employees.President Biden wrote:

Every person should be treated with respect and dignity and should be able to live without fear, no matter who they are or whom they love. Children should be able to learn without worrying about whether they will be denied access to the restroom, the locker room, or school sports. Adults should be able to earn a living and pursue a vocation knowing that they will not be fired, demoted, or mistreated because of whom they go home to or because how they dress does not conform to sex-based stereotypes. People should be able to access healthcare and secure a roof over their heads without being subjected to sex discrimination. All persons should receive equal treatment under the law, no matter their gender identity or sexual orientation.

What a beautiful sentiment: Equal treatment under the law, no matter their gender identity or sexual orientation.

Then I checked Twitter, and noticed that #BidenErasedWomen was trending. I clicked with curiosity, and learned that it was being pushed by TERFs. What does "TERF" mean? It's an acronym for "trans-exclusionary radical feminist"—women who, in the name of feminism, reject the assertion that trans women are women, call for the exclusion of trans women from women's spaces, and oppose transgender rights legislation. According to Vox, TERFs feel the term itself is a slur (even though they would agree it's an accurate description of their beliefs, and prefer to call themselves to call themselves "gender critical" (a euphemism which Vox accurately points out is no different akin to white supremacists calling themselves "race realists").

Civil rights is not a pizza. Just because we give some to one group doesn't mean there is less left for you. We saw the same this past summer with the Black Lives Matter movement with counter-protesters chanting "All Lives Matter" and "Blue Lives Matter." Black Lives Matter does not mean that your rights don't matter, or matter less; it means that Black lives matter, too. The same is true with President Biden's LGBTQ executive order.

I cannot believe in 2021 that concepts such as "Every person should be treated with respect and dignity," and "All persons should receive equal treatment under the law," are controversial. Yet they are, and the opposition by some straight women to equal rights for all trans women shows that while we've come a long way, we still have a long, long way to go.

I think these two tweets sum it up best.

I see #BidenErasedWomen trending so seems like a good time to remind everyone that trans people have been around in every recorded culture. Biden has simply said that he’s not going to allow people like me to be discriminated against for using female toilets, as we’ve always done pic.twitter.com/H9zCy7MW4R