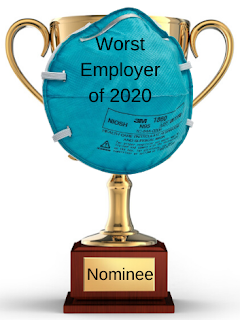 SHRM, the Society for Human Resource Management, describes itself as "the foremost expert, convener, and thought leader on issues impacting today's evolving workplaces." Physician, heal thyself!
According to a recent lawsuit filed against SHRM (as reported by The New Yorker), SHRM may have a huge whistleblower retaliation problem on its hands.
Here are the key allegations, which SHRM denies:
If you fire employees who dare ask for the ability to continue working from home, and potentially wield your influence with the government in an attempt to leverage the dismissal of the resulting lawsuit, while at the same time holding yourself out as the "foremost expert on issues impacting today's evolving workplaces," you might be the worst employer of 2020.
Jon Hyman
‹
›
Home
View web version