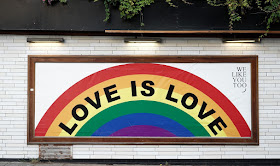 There is no law in the state of Ohio that prohibits employers from discriminating against employees based on their sexual orientation or gender identity.

The bill would amend Ohio's employment discrimination law to include sexual orientation and gender identity/expression within its litany of protected classes, and further prohibit discrimination on the basis of an employee's "sexual orientation" (meaning actual or perceived, heterosexuality, homosexuality, or bisexuality," and "gender identity or expression" (meaning the gender-related identity, appearance, or mannerisms or other gender-related characteristics of an individual, without regard to the individual's designated sex at birth").

The bill enjoys bipartisan support in both chambers of the legislature, the widespread endorsement by a coalition of more than 700 business groups (including myriad conservative and pro-business chambers of commerce), and broad public support of over 68 percent of Ohioans (while a mere 25 percent oppose such a policy).

So why hasn't the Ohio Fairness Act become law yet? According to Cleveland.com, it's because older Republicans in Ohio's Republican-supermajority-controlled House and Senate refuse to grant it any further hearings.

For example, Sen. John Eklund, a Republican who chairs the Senate Judiciary Committee, said he doesn't "think there’s broad support for it," and that he’s “not planning on having another hearing any time soon.” Adds Ohio Senate President, Republican Larry Obhof, “I think when you want to change the law and add potential new uses or tools for plaintiffs’ lawyers, I think there’s a burden on the person who wants a change in the law to show why it’s necessary."

Which means that this law is likely dead in the water, despite its strong state-wide support.

What can Ohioans do if you are among that majority that favor granting employment nondiscrimination rights to LGBTQ individuals? Call, write, and email your representative and senator. Let them know that you'll remember their inaction on these bills the next time you visit the polls. And urge them to vote these bills out of committee and pass them so that Governor DeWine can sign the Ohio Fairness Act into law. The time has long passed for this brand of discrimination to end, and Ohio is still sadly living in the past on this issue.