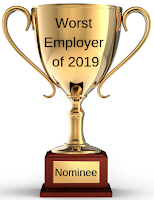 If you’re a health care facility whose employees erect a “wall of shame” of disabled patients, and then you drag your feet when an employee, who was also a patient, reports the misconduct, you might be the worst employer of 2019.

From the Bangor (Maine) Daily News:

Employees at St. Mary’s Regional Medical Center in Lewiston created a “wall of shame” where they displayed confidential medical records of patients with disabilities detailing issues with their genitalia and bodily functions, according to an investigation by the Maine Human Rights Commission that found the exhibit had contributed to a hostile work environment.

In addition, at least two employees looked at the private medical records of a fellow coworker, MyKayla McCann, whom the hospital had previously treated. She ultimately reported her suspicions about their actions, in addition to the wall of shame, to the hospital’s administration. When she did, it took three to four months for the hospital to remove the display, investigate and punish her coworkers, according to the investigation. …

A human rights commission investigator found there are reasonable grounds to believe that St. Mary’s hospital discriminated against McCann, who is a member of a protected class because she has a disability, when it subjected her to a hostile environment created by her coworkers’ conduct. …

McCann discovered the “shame wall” on the inside of a cabinet door on her first day of work as a laboratory technician assistant at St. Mary’s in June 2015. It had been labeled a “wall of fame,” with the word “fame” crossed out and replaced by “shame.” Portions of medical records had been cut and taped to the door. They “included information detailing patients’ sexual activity, genital dysfunction, bowel movements, bodily odors, and other personal maladies,” according to the investigator’s report.

McCann also provided pictures of the wall in her complaint. In one place, someone had attached strips of paper with diagnoses on them: “cramps/bloated/things to do w/intercourse,” stated one. “Drooping eyelids,” “butt wounds,” “unable to insert tampon,” “sour smell of vagina with occasional itching,” stated others.


For its part, the hospital’s parent company publicly apologized to McCann.

Public apology or not, if you permit a working environment in which this “wall of shame” could exist, you might be the worst employer of 2019.