Earlier this week I was in Philadelphia with my family for my son’s cardiac procedure. During our visit, we stayed at the Sonesta Philadelphia (because I’m a hotel snob and it was the only non-big-chain hotel that offered a special rate for the families of CHOP patients).

At check-in, the desk clerk, Rachel, asked what brought us to Philly. “Nothing great,” I reported. “My son is having a heart procedure on Tuesday.” “So sorry to hear,” she responded. “Please let me know if we can do anything to make your stay more comfortable.”

The next day, we all went to New York City so that Donovan could make his pilgrimage to the Nintendo Store. When we returned to the hotel, Rachel greeted us at the desk, and told us that she wanted to have delivered to Donovan a plate of warm cookies and milk. “That would great,” I said, “except that Donovan is gluten free and likely can’t eat the cookies.” “Let me find him something gluten free,” Rachel replied, “and I’ll have it brought up to your room.” What followed was a comedy of Celiac disease errors, with highly glutened ice cream bars, and, finally a 10 pm bowl of vanilla ice cream as Donovan was getting into bed.

Apparently, Rachel felt badly about the experience because, the following day, upon our return from Donovan’s pre-op appointment, Rachel had waiting for him a box of gluten-free cookies—which she bought herself at Trader Joe’s—and a card signed by the hotel staff. Needless to say, we were beyond touched. Rachel didn’t have to do anything for us, and certainly didn’t have to do anything more after her first attempt. It’s absolutely the thought that counts, and her thoughtfulness went above and beyond. 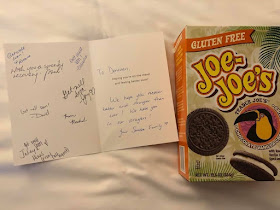 So here’s my tip for today. A little kindness goes a long way. Do something nice for an employee in need. You might be surprised just how much they will appreciate it.

As for Donovan, he was an absolute champ, both in spirits and medically. His pre-op echo-cardiogram showed that his pulmonary valve stenosis had worsened from moderate to severe, meaning that we had chosen the correct time for an intervention. The cath further revealed additional structural abnormalities surrounding his dysplastic valve, which suggested that the intervention might not be as effective as we would hope. Thankfully, that suggestion appears to be incorrect. The intervention relieved the pressure gradient in his valve from a severe 90 to a mild (and quite tolerable) 40. Now we just have to wait and watch how his valve responds to the procedure over time. Given the circumstances of his anatomy, it’s about as good of a response as we could have hoped for. (Big sigh of relief.) 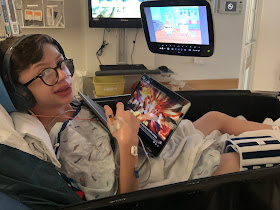 (Hopefully D-man won’t be too upset with this picture.)