I always assumed my kids would out-achieve me. I just never imagined it would happen by the 8th grade. 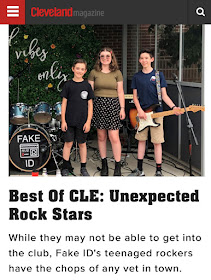 It’s not everyday you witness a band of 12- to 15-year-olds absolutely wail on Black Sabbath’s “War Pigs.”

Yet there’s Fake ID, chugging through the sinister heavy metal classic with style and skill to spare, cresting a wave of pummeling sound…. Yes, the cover act’s ages often precludes bars and clubs from their tour dates, but Fake ID’s easy poise and undeniable chops tend to draw a crowd wherever they plug in.

You can read the rest of the story here, check out Fake ID at their website, and catch them performing at the Best of Cleveland Party at the Rock and Roll Hall of Fame on October 25.

Here’s what else I read this week: