Government sanctioned discrimination is abhorrent and we, as a nation, should be ashamed 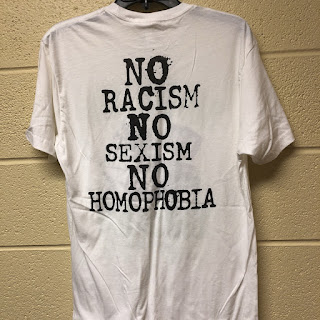 Yesterday, the Department of Labor’s Office of Federal Contract Compliance Programs, the federal agency that regulates and governs federal contractors and subcontractors, proposed regulations to clarify the scope and application of the religious exemption contained in section 204(c) of Executive Order 11246.

By way of background, Executive Order 11246, signed by President Lyndon Johnson nearly 54 years ago, “prohibits federal contractors and federally assisted construction contractors and subcontractors, who do over $10,000 in Government business in one year from discriminating in employment decisions on the basis of race, color, religion, sex, or national origin.” It’s been amended over the years, including its 2014 addition of LGBTQ protections to the list of prohibited discrimination.

Section 204(c) specifically exempts from coverage any “government contractor or subcontractor that is a religious corporation, association, educational institution, or society.”

The Trump administrations seeks to expand section 204(c) to permit religious organizations with federal contracts to “make employment decisions consistent with their sincerely held religious tenets and beliefs without fear of sanction by the federal government.”

What has people, including me, up in arms about this rule is its proposed change to what qualifies as a “religious organization.” The EEOC has long taken the position that for-profit companies cannot qualify as “religious organizations.” This proposal deviates from that long-standing rule for purposes of the OFCCP. Indeed, according to two senior DOL officials (per Bloomberg Law), the exemption would apply to “closely held companies acting in accordance with an owner’s religious beliefs.”

In other words, if someone organizes a closely held business for a religious “purpose” and holds itself out to the public as such, it would be exempt from the OFFCP’s anti-discrimination provisions if it operates its business consistent with its religious purpose.

What would this mean practically? As the ACLU tweeted, “The Department of Labor just proposed a rule that aims to let government contractors fire workers who are LGBTQ, or who are pregnant and unmarried, based on the employers’ religious views.”

This is not “religious freedom,” it’s government-sanctioned discrimination. And it’s just plain wrong.

Private businesses can’t hold religious beliefs. Extending to them these protections based on their owners’ religious beliefs is dangerous. And scary. And abhorrent. We should all be troubled by a rule that permits an employer to opt out of an employment law because of a religious belief.

Religious freedom as an opt-out from anti-discrimination laws is a dangerous construct. It’s easy to look at this issue through the lens of a political hot potato such as LGBTQ rights, the opponents of which often wrap themselves in the cloak of religion. The rationale of this rule, however, does not necessarily limit itself to LGBTQ rights. Our constitution guarantees freedom of religion. We irreparably damage this important principle when we permit a private business, under the guise of religious freedom, to opt-out, without penalty, from an employment law with which it disagrees or finds offensive.

If you stand with me, and against government sanctioned discrimination of any kind and in any form, write or call you Senator and Congressperson and tell them that this proposed rule cannot stand. That as a nation we are better than this. That all private businesses should be held to the same non-discriminatory obligations, regardless of the religious beliefs of their owners. And, don't forget about the comment period required by the rulemaking process for any proposed regulations. The public gets to chime in, and everyone who opposes this rule should do so.

To conclude, I’ll make this as clear as possible.

If you disagree, you’re a bigot, period.

And, if you hide behind your religion to protect your views, then you’re a hypocritical bigot. There is nothing religious about bigotry, no matter what some might want you to believe.