Supreme Court grants review in three cases to decide, once and for all, whether Title VII protects LGBTQ employees from discrimination 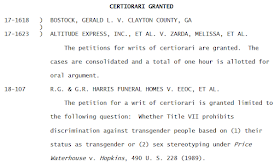 I cannot overstate enough the importance of these cases to the future of American civil rights. Currently, only 21 states have statutes that protect against both sexual orientation and gender identity discrimination in employment in the public and private sector. For the other 28 states (Ohio included), how SCOTUS decides these issues under Title VII has huge legal consequences. This is the employment law story of this year and next year.

To recap where we are: Title VII does not expressly prohibit discrimination on the basis of LGBTQ status. However, a majority of courts that have looked at this issue (but not all), and the EEOC, conclude that Title VII's definition of sex includes LGBTQ rights.

Barstock and Zarda stand on opposite sides of this issue—the former holding that Title VII's definition of "sex" does not, as a matter of law, include "sexual orientation," and the letter saying otherwise. Harris Funeral Homes reached the same conclusion as Zarda, but on the issue of gender identity (i.e., transgender status and transitioning identity).

It's too early to say how SCOTUS will rule, but the Justices to watch are Chief Justice John Roberts, the current ideological center of the Court, and Justice Kavanaugh, the Court's newest Associate Justice.

Chief Justice Roberts wrote a passionate dissent against a constitutional right to same-sex marriage in Obergefell v. Hodges. Will his ideology change when the issue moves from the bedroom and the Constitution to the workplace and a statute? James Esseks, director of the LGBT project for the American Civil Liberties Union (as quoted by Chris Johnson in the Washington Blade) thinks supporters of LGBTQ rights have reason to be optimistic

The petitions are here, by and large, because we have been winning in lower courts, right? The lower court, including some conservative lower courts have ruled for LGBT equality in a bunch of different contexts.… These are also cases that are not only in synch with a bunch of lower courts, but completely in synch with the American public. Supermajorities of the American public think that it's wrong and unlawful to fire people because they are LGBT. For the Supreme Court to take those protections away would be really quite a radical act, and so, that all gives me hope about how some of these cases could all come out.


Justice Kavanaugh, who never offered a public opinion on this issue, is very much a wildcard (albeit a very conservative one). Yet, Jon Davidson, chief counsel for Freedom for All Americans (also as quoted by Chris Johnson in the Washington Blade), sees hope:

Because Justice Kavanaugh has never ruled on an LGBTQ rights case and has made very few public statements on LGBTQ issues, we do not actually know what his views are. He also may be disinclined to lead in very different directions than Justice Kennedy, who was his mentor, for whom he clerked, who swore him in, and whose seat he is filling.


Still, as an employer you could short-circuit all of this legal wrangling simply by not discriminating on the basis of sexual orientation and gender identity. I've never hid my personal belief that no one should suffer at work because of the gender of the person they love, or because of the gender with which they identify. Nothing SCOTUS says about this issue will alter my beliefs. I choose love (not hate), tolerance (not discrimination), and equality (not bigotry). Period.

Or, you could just wait until sometime next year for SCOTUS to decide this issue for you. Stay tuned!