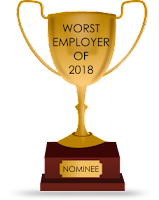 Today’s nominee for the Worst Employer of 2018 is Seasons 52, a national, Orlando-based restaurant chain.

The EEOC’s lawsuit sought relief for applicants age 40 and older that had been denied front-of-the-house and back-of-the-house positions at 35 Seasons 52 restaurants around the country.

During the course of the litigation, over 135 applicants provided sworn testimony that Seasons 52 managers asked them their age or made age-related comments during their interviews, including: “Seasons 52 girls are younger and fresh,” “Most of the workers are younger,” “Seasons 52 hires young people,” or “We are really looking for someone younger.”


If you reject older job applicants as a matter of corporate policy, you might be the worst employer of 2018.